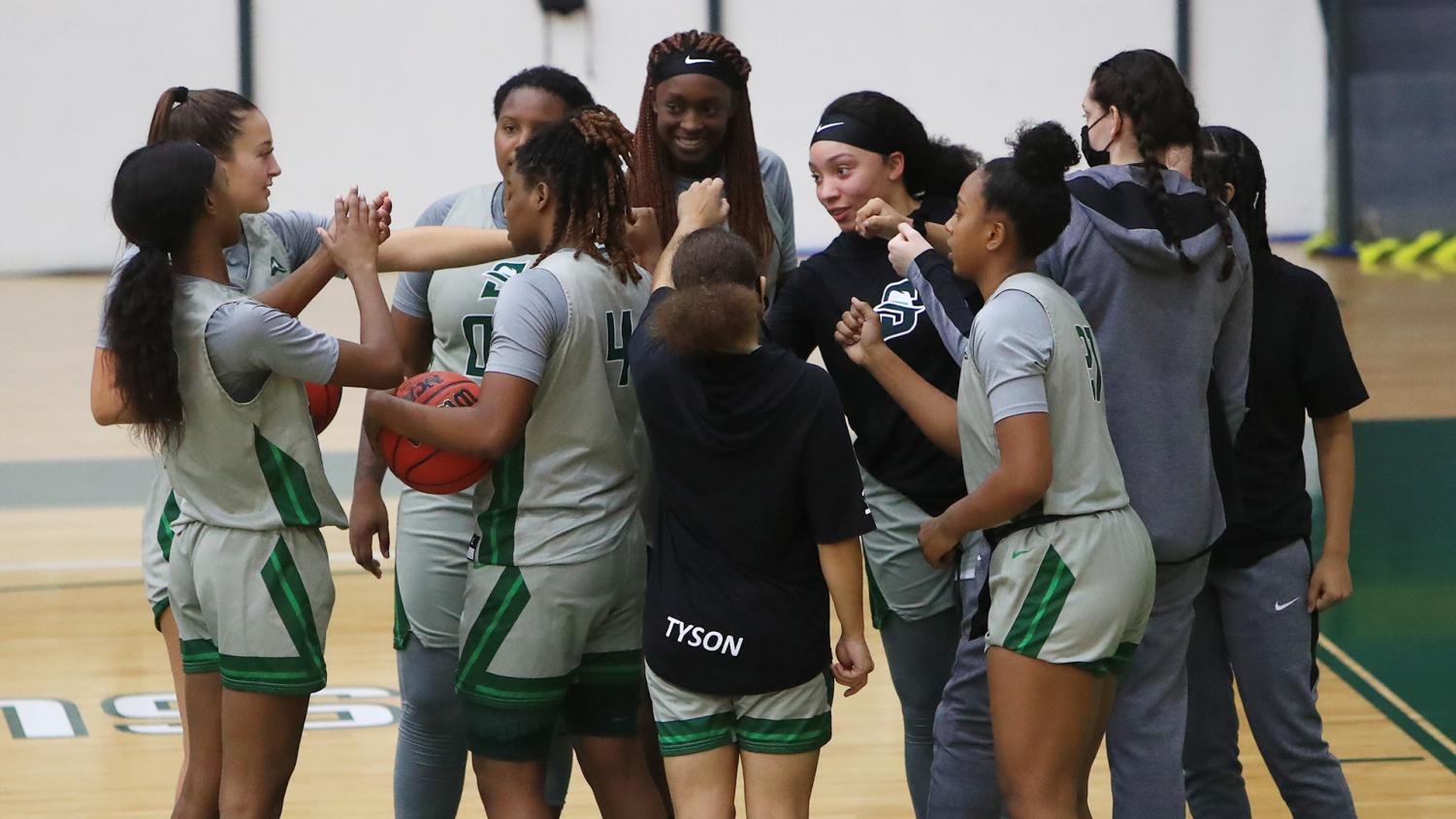 The Hatters huddle together during a timeout. (Jillian Semmel)

The Hatters huddle together during a timeout.

Stetson Hatters Basketball: The Women Behind the Team

With the women’s basketball team’s season winding down, we take a look at the team profile and some notable moments from the 2020-2021 campaign.

“We’re obviously really proud of everything we’ve overcome, since COVID’s been so crazy,” Curry said. “We’ve just come far, with everything that’s gone down, and I’m just proud of everybody.””

As the Hatters jogged out onto the court to a pre-game round of applause, there were all smiles on the faces of the team and coaches. It was a team that looked comfortable, disciplined, and above all, glad to be out there.

On Dec. 10, 2020, Stetson’s women’s basketball team played their first game of the season against Edward Waters College at home in DeLand. The Hatters won decisively— 48-98— and sent a message to themselves, the greater Stetson community, and the league at large: they were confident, resilient, and well prepared.

The pandemic has had a lasting effect on every aspect of life, including sports. These times require perseverance and hard work to overcome the obstacles that come with a sports season during the COVID-19 era. Stetson’s women’s basketball team is no different; after undergoing isolation and canceling the first three games of the season, they’ve weathered the storm of difficulties in 2020 and emerged unified and prepared for competition in 2021.

That being said, let’s take a look at the ladies that make up Stetson’s premier women’s basketball program.

Team chemistry is made in a variety of different ways; some instances can be more unexpected than others.

One particular change that the team underwent occurred during the voyage from team practice to conditioning training. Curry reminisced about the effect that the change in protocols due to the virus had on the team, and how it ended up building valuable memories.

“I remember we were in conditioning and this year was something different,” Curry said. “So this is something I’ll always remember.”

Typically after practice, the team would drive from the court over to the strength and conditioning facility. Due to COVID-19 protocols, the team had to run outside instead, as appropriate social distancing is not possible in the facility.

“It was something I’ll never forget,” Curry said, “Running from practice, across campus, some of us still in our practice shoes. We were already exhausted and then we were running in the hot sun… but we made the most of it.”

Off the court, the team was able to bond by forming study groups and helping each other academically. Beyond the study groups and support systems designed for student athletes, the young women also collaborated on assignments and studied together.

“I have a lot of classes with Yazz,” Kiya said. “So we’re working on homework and stuff and quizzes together.”

Despite the various obstacles associated with the pandemic, the Hatters have shown resilience and determination in maintaining a competitive season. Starting the season off 2-1 with two blowout victories and the singular loss coming to a ranked opponent (USF), the Hatters looked exceptional.

The initial momentum would wear off, however, as they dropped many of their next several games, including a 5-game losing skid. Through the first 15 games, Stetson achieved a record of 5-10.

Looking to improve upon a 12-18 record in the 2019 to 2020 season, the Hatters have seen some improvements from last year as well as some new standout performers. Yazz Wazeerud-Din, a junior who transferred this year to Stetson from South Georgia Technical College, has had an enormous impact on the team. Through 15 games, Wazeerud-Din leads the team in scoring and steals with over 15 points per game and more than 35 total steals.

Kiya Turner, a transfer student from Middle Tennessee State, has also made a splash in her first year as a Hatter. Turner currently is averaging just under eight points a game and ranks third on the team in rebounds per game with just under five.

Other notable performers include Tonysha Curry—who proved to be a commanding force in the paint while leading the team in rebounds—and Jamiya Turner, who leads the team in assists through the month of February.

Perhaps the most memorable moment of the year came in a thrilling Jan. 3 overtime game against University of North Florida.

With the score tied at 76 in the final seconds of overtime, Turner passed to Wazeerud-Din on the Hatter’s final possession. With all zeros on the clock, Wazeerud-Din hit a buzzer beater layup to give Stetson its third win of the season.

“It’s extremely rare to hit a buzzer beater in overtime,” noted Assistant Director of Athletic Communications Jamie Bataille. “For me that has been the top moment of the year.”

Wazeerud-Din was also awarded ASUN Player and Newcomer of the Week on Feb. 15 for her efforts later in the season.

On Feb. 14, Stetson scored 45 second-half points to nearly erase a 19-point deficit against North Alabama but came up just short in the end. The Hatters lost by a final score of 65-70. Even when they haven’t come out on top, the Hatters have put up valiant efforts worthy of recognition.

If the Hatters’ 2020 to 2021 season could be summed up in a word, it would be resilience. The team battled obstacle after obstacle and still produced several spectacular performances during the course of the season.

“We’re obviously really proud of everything we’ve overcome, since COVID’s been so crazy,” Curry said. “We’ve just come far, with everything that’s gone down, and I’m just proud of everybody.”