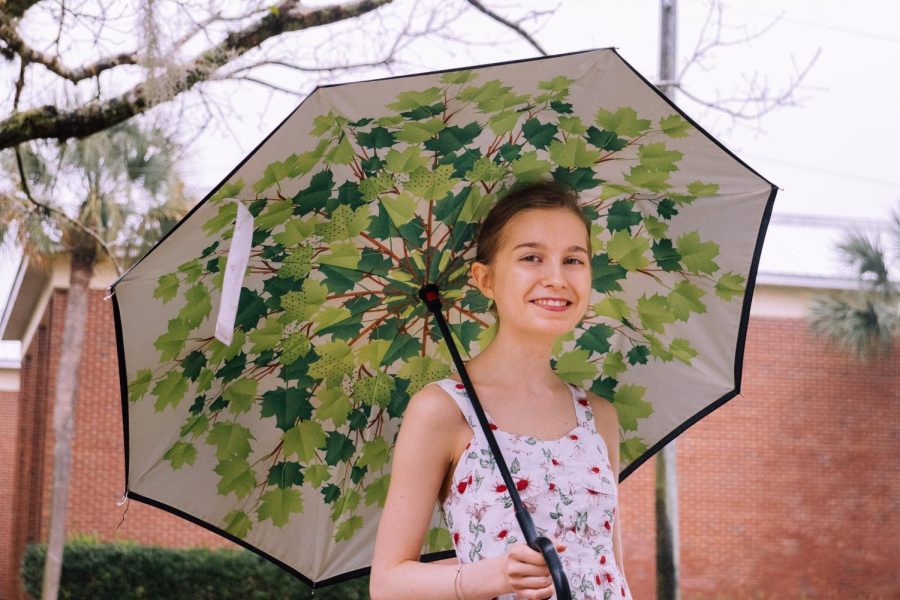 Minimalism: A Profile on Anne Brooks

Minimalism. What usually comes to mind is trying to live in a way that is smaller; in a way that makes less of an impact. Some may think of tiny homes, or living in small places with just the necessities. When thinking of someone who encapsulates minimalism, I was told to talk to Anne Brooks.

Who is Anne Brooks? She is food science major and has a minor in sustainable food systems. She enjoys going to dance classes on Fridays and is a public health tutor. She lives on campus in a suite style dorm and has basically been a minimalist her whole life. But before she came to Stetson, she never had a word for her aesthetic.

When I asked her how she got into minimalism, she told me this: “It’s kind of funny that you should ask me that because I wouldn’t really say I ever got “into” minimalism. In fact, I had never had anyone call me a minimalist – including myself until I got to Stetson. Because I’ve never liked clutter, having too many unnecessary things around makes it harder for me to focus and stresses me out.

And so, I think, that I’ve always been that way, and I think once it became more of a trendy thing and people put a name to it – then when I cam here I remember one of the first people I ever had come into my old dorm room was like ‘wow I love your minimalist aesthetic you’re such a minimalist,’ I was like ‘oh am I? Okay,'” she laughed. “So I thought it was funny when you contacted me to do this because ‘Alright I guess I’m a minimalist.’ I like keeping things functional and efficient.”

In recent years, the idea of minimalism has become a trend. Tiny homes are cool and fresh, and people are trying to make less of an impact on the world by being more environmentally friendly. By living off of only what you need, you’re doing just that.

Anne has a good definition of minimalism. “I would say minimalism is really just living within your means. A lot of people have the misconception that it means you live in this beige box and only have one folding chair and live in sadness, but it seems more to me about having things that focus more on the things you need, and of course having a few things in there that make you happy.”

She showed me a knife that was capable of cutting a lot of different things and had the beautiful pounded metal look to it. She said it was something she’d always wanted, due to the fact that se loves to cook. This desire for one object in particular also hands itself to Brook’s idea of minimalism. It was multifaceted and it was something she’d wanted for a long time.

Since she’s so interested in eating and cooking green, I asked if she thought it worked well alongside minimalism. She responded, “I can see how there would be overlap in people interested in both things, because a lot of people who tend to be more minimalistic are very intentional about the things that they purchase, the things that they keep around them, and so being intentional about your actions – which includes eating and that’s one of the things that you do several times a day – that can make a really big impact that people really don’t think about. So being intentional in both aspects of your life, I can understand why there would be a lot of overlap between those two.”

I was curious to know if living in a dorm helped or hindered her minimalistic aesthetic. “I think that it definitely helps and going back to what you said about like, what I would say to someone who wants to start being more minimalist, particularly if you live in a dorm, something that can helpful to think about is ‘Do I really want to have to move this in and out on move-in day? Do I really want extra stuff that I have to carry up and down the stairs?’” Brooks said.

“Having space constraints helps because you can see all of your belongings and this one thing I really love about living in a dorm actually is that this is the first time I’ve had my own space where I can keep it as clean as I want it to be. Your space is as clean or as messy as you want it to be, so if you want it to be clean then it stays that way.”

I asked her if she would have any advice for someone that’s interested in being more minimalist or minimizing their space. In response to that, she said: “So I think that one thing that I always –cause it can be hard to get rid of certain items, I know, especially clothing, there’s always that thing where you have a shirt, for example, that you haven’t worn in two years but you also can’t really get rid of it because you just feel like you can’t – and one thing I’ve always said to myself ever since I was little and would be cleaning my room is ‘in a couple of months, will I even care that I got rid of this?’ Because chances are if you – I think there are a lot of things that people buy that they don’t really need, and that doesn’t really have that much sentimental value to them, that if they donated it somewhere to someone that would actually value it within a few months you’re not even going to remember that you got rid of it to begin with.”

Minimalism is more than just a trend, or an aesthetic. To Anne, it’s how she lives her life. Her room is kept simplistic and clutter free. She doesn’t have more than she needs, decoraations like cute stuffed animals on her windowsill and stationary on her desk is just enough to have some personal touches; she doesn’t live in excess. Minimalism in essence is just as she described it. It’s living within your means, and not going overboard with anything.