Choose Your Fighter: Dub vs. Sub

Looking in-depth at the ongoing conversation between all consumers—which do you choose? 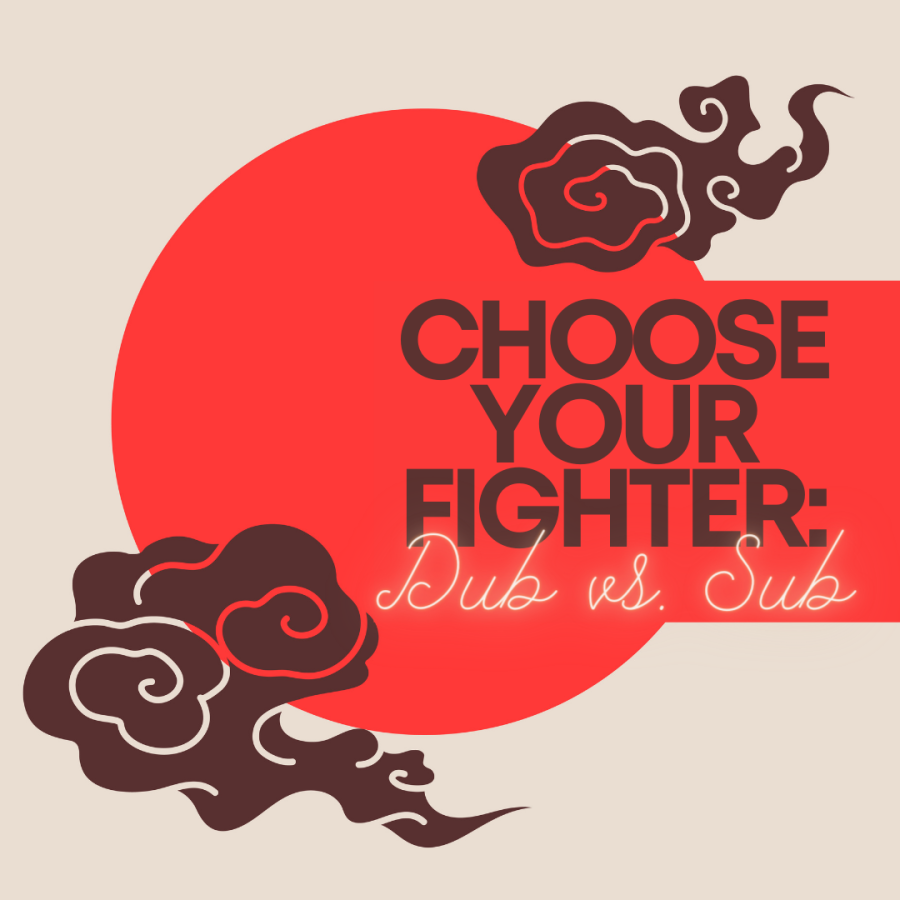 It began in the 1960s. Anime made the metaphorical trek from the beautiful shores of Japan to the doorstep of the United States. The first show aired was “Astro Boy”—an anime set in the future about a world in which robots and humans coexist—which was licensed by NBC and brought to the small screen. This was the United States’ first exposure to anime, and there were several other anime released around this time, but the giant boom in popularity didn’t occur until the 1990s when now-legendary series such as “Pokémon” (1997) and “Sailor Moon” (2003) aired.

This period of time was hailed as the “golden age of anime” in Nihon Keizai Shimbun (a Japanese business and economics paper) and set the bar high for future multimedia to reach. These series began a whirlwind of curiosity about Japanese media amongst the American population, and networks such as Toonami (Cartoon Network’s anime programming block) began airing popular anime series for audiences nationwide, bringing more viewership to these brilliant productions. Even today, there are more fantastic anime being produced, and their popularity only continues to rise through time, but the ways in which viewers are watching these shows seems to have sparked debate.

With most anime, there is the option of watching it dubbed over in your native language, or in its original Japanese with subtitles. Some would argue that it’s best to listen to it in its original form with subtitles, while others attest to the benefits of listening to it dubbed in their native language. The question is this: is there a better way to watch anime? What might it be, and how does this translate over to foreign media as a whole? So, let’s explore these opinions further and see what each side has to say.

Here we have those who prefer to listen to anime in their own native language. Some who have chosen this method claim to not like subtitles, but others have different reasons involving the show itself. Jennifer Wilber states in their article “Subbed Vs. Dubbed: Which Is the Best Way to Watch Anime?” that some dub advocates “claim that being required to read subtitles distracts from the story.” Switching between the graphics on screen and the text can hinder their watching experience. Some would argue that having it in their native language can provide a more immersive experience. Others have stated that listening to it with their native language dubbed removes content restriction such as censorship, which anime dubbed in Japanese can sometimes enforce by eliminating mature content.

This brings forth a thought-provoking question: do some things get lost in translation in the dub? The truth is, yes, some things are changed when the program is recorded in another language. The Artifice’s article “The Anime Dub Controversy” states that “some of these [English] dubs were infamous for altering or removing entire character arcs or plot points, as well as altering or removing names or cultural references in order to hide the fact that the anime was supposed to take place in Japan.” This alteration can change the experience for international audiences. That then brings us on to the other side of this debate: the sub advocates.

Here we have advocates for listening to anime in its original Japanese. On this side of the debate, listeners have stated the opposite of what the pro-dub individuals have said. Wilber states that one of the primary reasons for listening to the original version is that “subtitles allow them to experience the anime the way the creators meant for it to be seen.” These advocates have been dubbed “purists” due to this reason.

Other reasons exist for this side, another being one of the same reasons as the opposing group. Some of the older anime such as Sailor Moon (2003) have been censored in the English dub. In Sailor Moon (2003), the original Japanese version had Sailor Uranus and Sailor Neptune as lovers, but the English dub labels them as cousins instead. The recent remake of the show’s English dub, however, has fixed this issue to fit the original narrative in the Japanese version. Unfortunately, anime can be changed no matter the version you’re watching.

So, we’ve reached the end of our discussion, but that brings in the aching question: how should someone watch anime? Well, the reality is, there is no right way to watch. Both sides have valid arguments as to why their version of anime-watching is the best, but there are definite benefits to watching anime in dub or sub. Bottom line, if you’re looking to watch a new anime series, watch it in whatever way makes you the most comfortable. Whether you’re a purist or a dub-enthusiast, you have the right to watch it in whatever way is most available to you.

Hopefully, these reasons may provide some encouragement to watch the new upcoming show or seasons like the finale to “Attack on Titan” or maybe it rekindled a love for anime that has been lost. Either way, it’s always best to familiarize yourself with international multimedia, so pick up that remote and watch something new in whatever way you’d like.