Sitcoms and Marvel Madness Come Together in “WandaVision“

“WandaVison” follows Avengers Wanda Maximoff and Vision as they live a life in a world that feels like a sitcom. The couple soon finds out that everything in this world is not as nice as it may seem. 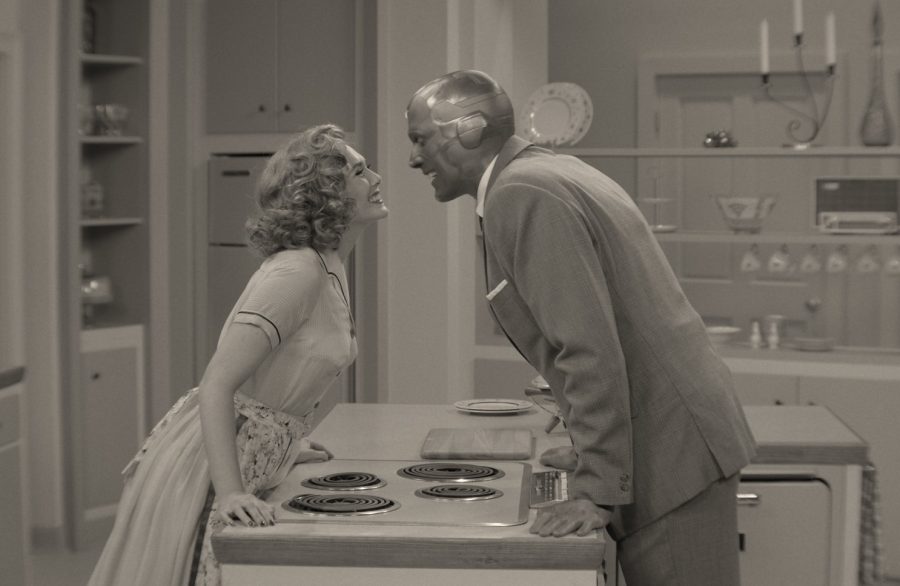 “WandaVison” takes the Marvel Cinematic Universe to a new level with the first Marvel Cinematic Universe (MCU) show to premiere on Disney+. The show follows Avengers’ Wanda Maximoff and the Vision living their ideal domestic lives in the suburbs as a happily married couple in a sitcomesque world. However, as the show goes on, civilians and agents of S.W.O.R.D. find out that Wanda’s life might not be as perfect as it seems.

The pilot of the show is very reminiscent of shows like “I Love Lucy” and the “Dick Van Dyke Show.” The episode is in black and white is shot in a 4:3 ratio to fully give it the stylistic looks of a 1950’s sitcom and even has an adorable, catchy intro song. The first three episodes of “WandaVision” follow the standard classic sitcom format that includes a peppy theme song, a laugh track, and lots of cheesy jokes. Each episode centers around a different decade, and the 1960’s episode “don’t touch that dial” even plays direct homage to “Bewitched.” These episodes are full of quirky dialogue, a laugh track, and peppy performances from Elizabeth Olsen (Wanda) and Paul Bettany (Vision).

The supporting cast is also brilliant in these first three episodes. Kathryn Hahn plays Agnes, the noisy neighbor who’s always barging in on Wanda’s business and causing shenanigans. Hahn is so clever and charismatic in this role; she has great comedic timing and is so entertaining to watch. Her performance even made me reminiscence on her role as Jen Barkley in “Parks and Recreation.” Teyonah Parris plays Geraldine, a friendly citizen of the town of Westview. She is happy and ready to help Wanda out but as the plot progresses, she begins to get confused and senses that something might be wrong. Teyonah Parris does a great job of showing all the various emotions her character is put through and is very convincing.

Things start to take a bit of a darker turn in the third episode; Wanda’s powers start to get out of hand while she goes through the pregnancy and birth of her twin sons. The action gets more intense around episode three, and the show starts to incorporate more elements that feel reminiscent of Marvel films with big action scenes and serious moments. Wanda’s brother Pietro, who has died, is mentioned in episode three and you can see in that scene that she is grieving his death, which provides a setup for the darker shift that the series takes.

The sitcom plotline pauses during episode four. It shifts its focus to Monica Rambeau and the agents of S.W.O.R.D. as they process life after the “blip” to discover that Wanda has made a sitcom by using her magic and has trapped citizens in her little world. Episode four adds more supporting cast members. Randall Park reprises his role as Agent Jimmy Woo from the Ant-Man series, and Kat Dennings reprises her role as Darcy Lewis from the Thor series. I really enjoyed the performances given by these supporting characters, since most of them only had small roles before, and it was nice learning more about them. I especially loved Jimmy Woo; he has great charisma, is funny, loveable, and has the potential to be a bigger character in the MCU in the future.

Even though the supporting cast is stellar, what is really great about the show is how the main characters are written. Prior to the show airing, I liked both Vision and Wanda when they appeared in past films, although they never were my favorites because I felt like I didn’t know that much about them. “WandaVision” does an excellent job of fleshing out the characters’ personalities, thoughts, and feelings.

Wanda’s story is also very well done. She is grieving the loss of a loved one, which is one of the worst possible trials a person can go through. What makes Wanda’s grieving process so interesting to watch is that she is in full denial. She can’t handle the fact that Vision is gone and she creates this sitcom-themed fantasy because as a child she would watch sitcoms for comfort.

As the series goes on, Wanda is forced to remember that she is in a fake world as she gets calls from the S.W.O.R.D. agents asking her to stop putting on this fake show, making the series even more interesting as it progresses. In one episode, Wanda is forced to go back to sad moments from her childhood and even sees Vision dead. She is a very complex character who is going through a horrible experience, but she also is very strong, as she is processing grief and learning to cope in a world without the people she values most. In fact, most of the tension and problems that arise in the series come from Wanda struggling to grieve in a healthy way.

Wanda is also known as the Scarlet Witch. This means that she has the ability to perform magic and manipulate things. As the show progresses, the viewers learn more about her superpowers and how she uses them. Probably my favorite part of the series was the show’s villain and how they revealed her. I loved how fun and snarky this character is, and I hope they make more appearances in the MCU.

One of the most enjoyable parts of the show was Paul Bettany’s performance as Vision. In this series we learn a lot more about his character where in a couple of episodes, we see Vision trying to act like a human and work an office job, which provides great comedic relief. But he also gets excellent character development. He starts to sense that there is something off about the life he is living with Wanda in Westview, which builds conflict in their relationship. Bettany gives his stand-out performance in episode eight, where he gives this emotional monologue to Wanda about grieving the death of her brother and says the line, “But what is grief, if not love persevering?”

There were a lot of elements to “WandaVision” that I heavily enjoy, but the show’s biggest problem is its pacing. This pacing problem became an issue for me around episode seven which ends with the reveal that the nosy neighbor Agnes is actually a villain. She is a powerful witch named Agatha and has captured Wanda’s children. The episode ends with an original song “Agatha All Along” which explains that Agatha has been the one causing Wanda trouble throughout the entire series. The scene with “Agatha All Along” was styled like an old sitcom intro and I thought it was such a clever way to do a villain reveal and end the episode. Episode seven has been my favorite so far. I absolutely loved Karthyn Hahn’s performance as Agatha and was anxiously waiting on how the rest of the show would go after this big reveal.

I was slightly disappointed when I saw episode eight, which is an episode filled with flashbacks and tackles Wanda’s past. In the episode Agatha shows Wanda a bunch of moments from her childhood, and we see how Wanda watches sitcoms as a way to process hard moments in her life. It is an interesting concept, but I was expecting a bit more than just the two characters making banter while looking through old memories. The flashbacks do help with giving more depth to Wanda’s character and helped the viewers learn why she is making this false reality. I had just wished this information had been given in an earlier episode, not in the second to last one.

Then the finale ends the series with a giant marvel action sequence that lasts for about half of the episode. After the long battle, Wanda and Vision do get a good wrap-up scene, however, I feel like the other character did not. After the episode, I felt as though something was missing. The action scene was visually stunning, but would have benefitted from more sitcom callbacks, some more scenes with the agents, or one last catchy theme tune. I found it frustrating that after introducing Agatha’s character, the show wraps up so fast without giving Agatha and Wanda some more moments together before their battle at the end. The finale felt like cramming so much into an hour between the action and the personal wrap ups for all the characters.

I do wish that “WandaVision” kept some of the light and fun qualities that were present in the earlier episodes into the ending as well, and I also think that it should have had 10 episodes, instead of nine, so the finale would’ve been less rushed. But overall, you’ll enjoy “WandaVison” and its action packed and riveting story.