Want to scratch your caffeine itch in Downtown DeLand? Natalie and I have tried it all, narrowed it down, and got you covered. Follow the coffee beans and take a tour with us around town, and if your heart’s not beating frenetically afterward, you’ve done something wrong. 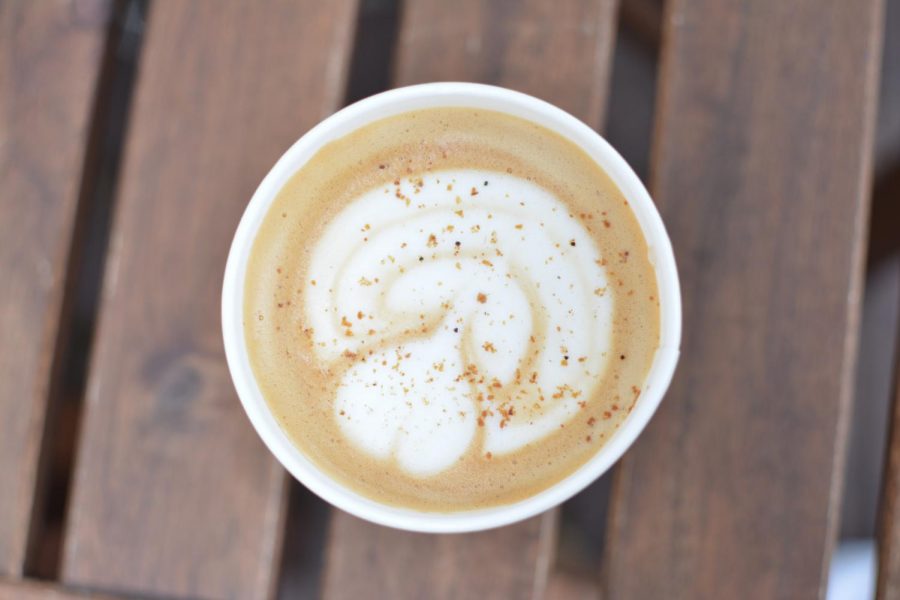 Is it a sweater vest day?” is something that Joey Tribbiani of “Friends” might say mockingly to Chandler Bing to gently jest at his classic weekday garb. Yet, “Is it a sweater vest day?” is exactly the question that was posed to Natalie and I at Trilogy one bustling Wednesday morning by the shop’s owner, proving that we are either A., addicted to coffee, B., addicted to going to Trilogy, or C., all of the above.

The Sweater Vest: In this case, the Sweater Vest isn’t a fluffy, no-armed V-neck to throw over a shirt in an attempt at fashion, but a type of coffee — a cappuccino with cinnamon, nutmeg, cloves, and probably a dash of pixie dust, it’s so good. It’s just the right amount of sweet — unless you’re a Dunkin’ Donuts regular—then it may not be sweet at all. The baristas at Trilogy are foam masters, so the Sweater Vest not only tastes good, but it also looks beautiful — and when you pull off the lid, a rose-looking design awaits you.

The cold brew: We’re also a fan of Trilogy’s cold brew; As Natalie puts it, it’s not so bitter that it “hurts your taste buds,” like Starbucks’ version is prone to, but it’s nutty and caffeinated to just the right amount where you don’t feel overwhelmed. Trilogy also appears to make a conscious decision about the amount of ice they use: even once it melts, your drink isn’t 50% water.

The best thing about Chicas’ coffee is that after you drink it, you feel like anything is possible. Is that because of their espresso’s high caffeine level? Probably.

The espresso: We are avid cortadito consumers — a shot of espresso with a bit of milk and some sugar — but we decided to try the plain espresso to sample the Cuban restaurant’s coffee at a base level. And what ensued was a feeling of pure intensity — so much so that we stirred in some sugar to save our taste buds from the shock of coffee we’d just sipped. If you’re a black coffee drinker, their plain espresso may be just the java jolt you desire.

The café con leche: We also ordered the café con leche — one shot of espresso with more milk and sugar — which, in the Cuban coffee world, is the polar opposite of the plain espresso. This was like drinking a very sweet, very frothy dessert; it arrives in a cup so large that we joked that soup would be a better use for it. When it comes to the coffee itself, you can’t taste the espresso as much as you can taste the sugar and the milk that surrounds it, but if you’re a fan of a softer coffee with less of a kick, you’ll definitely be fond of the café con leche.

There is nothing like going into Boston Coffeehouse on a chilly morning and asking for “one small, hot Nutty Irish Lady.”

The Nutty Irish Lady: What’s even better is that the servers know that what you desire is not a teeny Caucasian stripper, but a warm, latte-esque drink, complete with Irish cream, hot pink sprinkles, and a cherry on top. Any of their drinks can be ordered iced, hot, or frozen, and the Nutty Irish Lady is my favorite when ordering the frozen variety of their fancy coffees. But don’t let their names scare you off. A Yankee Doodle and a Boston Caramocha are as flavorful and tasty as a Starbucks frap, but better, if I do say so myself. If you go to Boston’s, opt for one of these.

The iced coffee: Just like at Chicas, we got a baseline drink: in Boston’s case, this is the iced coffee, which neither of us enjoyed — we felt it tasted like coffee with the volume turned down. It lacked the punch and the nuttiness that Trilogy’s cold brew had, and the jolt that the espresso at Chicas had. Simply put, we expected pizzazz — an explosion of flavors like we found in the Nutty Irish Lady — but were let down by its blandness. But we promise, we both tested negative for COVID-19.

Arriving a little past 11 a.m., Natalie and I were definitely some of the first people at Pho Co. This local Vietnamese restaurant is known for — what do y’know — their pho (pronounced f-uh), a soup noodle dish in a bowl filled to the rim with vegetables and noodles, as well as meat, seafood, or tofu. Yet it was only recently that we’ve gone beyond ordering the eponymous menu item and looked south to discover the tea list. If you’re fervently anti-coffee — a reality that Natalie and I cannot fully grasp, but will accept — or love tea and are hoping to expand your palette a bit, Pho Co is the place for you.

The boba: I’ve had mixed experiences with boba, but Pho Co’s is — dare I say — perfect. At Pho Co, I’ve tried the passionfruit and the strawberry flavors of their boba tea, but the lychee — which is a naturally sweet fruit with a little tang — is my favorite. The boba itself pairs perfectly with the tea; it’s made of tapioca, and is chewier than the melt-in-your-mouth kind that you’d try at a fro-yo place. What I like the most about the drink as a whole is how “Goldilocks” it feels in regards to its sweetness — I don’t feel overwhelmed by its sugar, but I’m glad it’s there, because any less and it’d be too bitter.

The Thai tea: Natalie’s favorite is the Thai tea, a milk based drink that I feel tastes like the cereal Raisin Bran rolled into a drink, but she thinks it is a flavor experience unique to the tea itself. If you order it, don’t freak out when you see your drink is bright orange — it tastes nothing like citrus. It has the right amount of milk, and similar to the boba, is just as sweet as you want it to be.