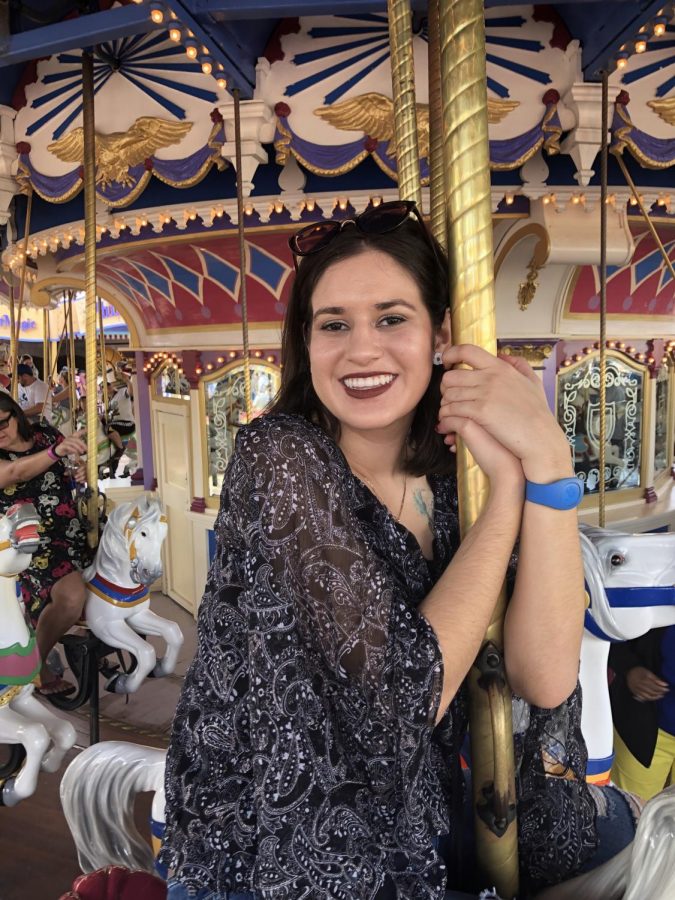 One of the best parts of Stetson is just how small the community is. As I scrolled through Twitter one day, imagine my delight upon realizing that the two haunting polaroids in Touchstone 2020 were taken by a mutual of mine on Twitter. “Ampersand” was the perfect excuse for me to finally get to know Nikita Shinn (‘19) beyond the occasional exchange limited by 240 characters.

Nikita graduated in Fall 2019 with a Bachelor of Science in psychology and is currently enrolled in Stetson’s counseling program with the hopes of getting a play therapy certificate to incorporate a creative outlet in future counseling clients.

Apart from her major in psychology, Shinn also minored in creative writing during her undergraduate career at Stetson, with a special interest in poetry classes. It was Terri Witek, Ph.D., professor of English and the Sullivan Chair 46 issue 3 in Creative Writing, who Shinn felt inspired by to continue writing. “I took the intro to poetry class. I was like, okay, I think I like it. And then I took the advanced class, and I was like, okay I really like it,” she said with a laugh.

In fact, it was a poetry assignment that led to Shinn’s discovery of her love for Polaroid photography. “It was actually Terri who inspired me because one of [the assignments] was like, go out of your zone. And I had the Polaroid camera, and then I started thinking about using photography as that, you know, way of doing it.”

Then we talked shop, and no, I don’t mean photoshop. Take a polaroid camera, for instance. This technological dinosaur hailing from the 1970s still had some tricks to make photo magic. I was woefully unaware of how much one could do without photoshop or editing apps. “So there’s a setting on a Polaroid… you take the picture and then you turn off the camera without taking your hand off the button… You turn it back on and take the photo again. I forget what it’s called. I think it’s like double XP or something.” This is the tech trick Shinn used in her two Polaroids that found their way into Touchstone 2020.

Returning to the two eye-catching Polaroids—“S A N C T U A R Y” and “1 in 4,”— Shinn mentioned how she only submitted those two pieces, with both earning their place in Touchstone 2020: “I think they were both just ones that I really liked. And I think they were like my favorites. And the ones… I’m most proud of, too.” As to the meaning behind the pieces, “the main one is finding a sanctuary after living a life a chaos,” as well as “1 in 4 children that are victims of human trafficking.”

Shinn also described her differing methods when approaching poetry versus Polaroid photography: “I think the thought process with poetry and photography is completely different. Like, I sit down, and when I write, I’ll just think of words. And I’ll just keep thinking until something happens.”

“Poetry, it comes to me, and I can’t force it. I’ll pass a place or something. I’ll be like, you know, I think that would be a good photo. But… the image just doesn’t come to me. It’ll be weeks before I take another photo… I think with photography, it’s more kind of mysterious, I would say, like, you don’t know what you’re looking at. That’s kind of the point. I want it to be like, oh, that looks cool. But I also don’t know what it is, like, what’s happening in this photo here. Then with poetry, it’s more dark and personal… For some reason, there’s always a metaphor with plants. I don’t know why, but there always is one.”

The symbiosis of her psychology major and creative writing minor took root in her own writing: “I felt like when it came to writing about things, I think having that psychology to be able to understand what I was feeling helped too. I feel like having that psychology helps me understand more about what I’m going through… Because when you do art, even if you never have known art therapy and stuff, you are expressing something that you might not have realized was hurting you. It’s kind of that unconscious process. Like when I write, I didn’t even realize that I felt that way, or how much hurt I was actually in until it’s written.” It is this unconscious regeneration from creativity that Shinn wants to bring to her clients in therapy.

Shinn’s parting advice regarding self-expression was to, “just be patient, and let the thoughts come… And I feel like once you get the creativity bug, you can do it, but you just have to wait. And maybe ponder on what you like and what you don’t like and things that inspire you. But you need to be patient and just let it come.”

For a while, Shinn didn’t realize she had a passion for art, and hadn’t really thought about how her art specifically would impact people, “When I write, I do it for me,” she tells me. But her Polaroids, those are for “[expressing] a feeling that I can’t sometimes put into words.”