Jacob Johnson: The Future of Florida

Jacob Johnson (‘22), a junior at Stetson, is running for the Florida House of Representatives, District 26. We sat down with Johnson to learn more about what inspired him to embark on the journey as both a student and a politician, and what he hopes for the future of Florida. 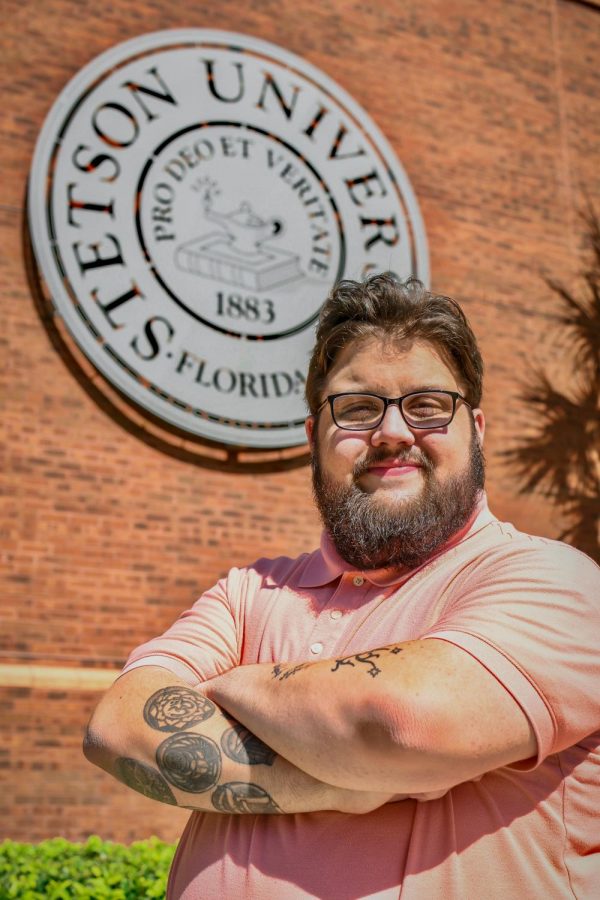 Before life as a candidate, Johnson was an activist and organizer. Working for NextGen America, a nonpartisan political organization dedicated to increasing voter registration amongst American youth, Johnson developed great insight in political organizing—a skill he hopes to carry into his political career. He sees the youth electorate, Floridians aged between 18 and 27, as a pathway to victory in the 26th district, as well as the key to making things better for Floridians. “If they [the youth] exercise that voice, things can get better for them, as well,” said Johnson.

A big question for any college student attempting to pursue a career while in college is the obvious, how do you anticipate juggling running for office and doing homework? “I certainly expect it to be a massive undertaking,” Johnson said, “but, I have worked political fellowships here on campus before…I think I am prepared to do both.”

Johnson, currently 20 years old, will meet the requirement set forth by the Florida constitution by the election date in 2022, as he turns 21 in July. You must be a resident in the district in which you are planning on running in, and Jacob is currently living in DeLand as a Stetson student, and will continue to do so during the campaign. In case you were wondering, the election registration process is incredibly easy. “It was pretty much me going to the library to print out a couple of forms and mailing them in to Tallahassee.” Realistically, operating campaigns are complex, but they’re not rocket science. Campaigns take people, money, time, and a ton of energy. Johnson, however, seemed unabated by the lack of all four of the prior mentioned requirements and seemed to like his odds. So, if you’re considering running, why not head to DuPont-Ball library and print out some forms like Jacob did?

A quick search for “26th district Florida” on Google will result in the federal congressional district, which resides in the Everglades and the Florida Keys. This is not to be confused with the Florida House of Representatives District 26 which runs from as west as Hontoon Island State Park to as west as downtown Daytona beach. Part of what makes him so passionate about the area is his love for everything that the district entails. Johnson recollected that the environment, and especially the views of Volusia, are his favorite part: “I love our schools and downtowns. Once you cross that bridge into Daytona Beach it’s such a pretty drive.”

Given Johnson’s role as both a student and a hopeful future member of the House of Representatives, the current political culture at Stetson is something he has given thought to. “You’re always gonna find a difference of opinions. With COVID going on, there hasn’t been much interaction in general.” The campus, nearly void of face-to-face interaction due to COVID-19 mitigation, has put a halt in political dialogue within the community. To address this, Johnson praised the work of College Democrats and Young Americans for Freedom for encouraging political dialogue and pointed out the efforts of Kevin Winchell, Associate Director of Community Engagement: “That [political culture] is something Kevin and Stetson Votes is working on… certainly I think there can be more. That is something I would love the opportunity to do.”

Johnson is a self-labeled progressive. For him, he feels that “You have to take the interests of working-class people, marginalized communities, and the general large structural problems that we see with our country and take those into account.”

Johnson’s key policy cornerstones are climate change, police reform, income inequality, and education reform. He is in favor of a Green New Deal that is adjusted to the needs of Florida, and he praises Representative Alexandria Ocasio-Cortez’s national push in this regard. Johnson advocates for municipal and state level police reform to include more mental health and addiction counselors and believes strongly in the role of education in combating poverty. Additionally, the unemployment system in Florida, which he believes is “massively broken,” is a top priority should he be elected in 2022.

As a college student himself, Johnson feels as if he has a unique perspective on the issues plaguing college students. He is an advocate for “grant programs to individual students that would allow them to go to universities and increase university funding.” He also believes the state should “offer free kindergarten all the way through the university level offering free state schools” and that “private schools shouldn’t be neglected or pushed down in order for state schools to succeed.”

When asked how Johnson plans to propose to pay for these initiatives, as his counterpart most surely will ask, he responded quickly and calmly. “There’s money in the budget to support our citizens and to support our workers. It would require a mix of increasing revenue and cutting some of the spending in areas that we are spending too much.” It was also here that Johnson mentioned the legalization of recreational marijuana as a potential revenue stream for the state.

In terms of the logistics of running a campaign, Johnson is relying on volunteers and canvassing efforts to knock on doors to get his name out into the public. Mentioning the massive discrepancy in funding between himself and Elizabeth Fetterhoff, he stressed the importance of grassroots engagement.

All in all, Johnson is a young, passionate, and progressive politician looking to improve the lives of his fellow Floridians. Although the challenges in his path to candidacy may be monumental, it appears that Jacob Johnson is determined to tackle not only those, but his homework assignments as well. If you are interested in learning more about Jacob Johnson and his campaign, head over to https://www.electjacobjohnson.com/