A Measure of the School of Music 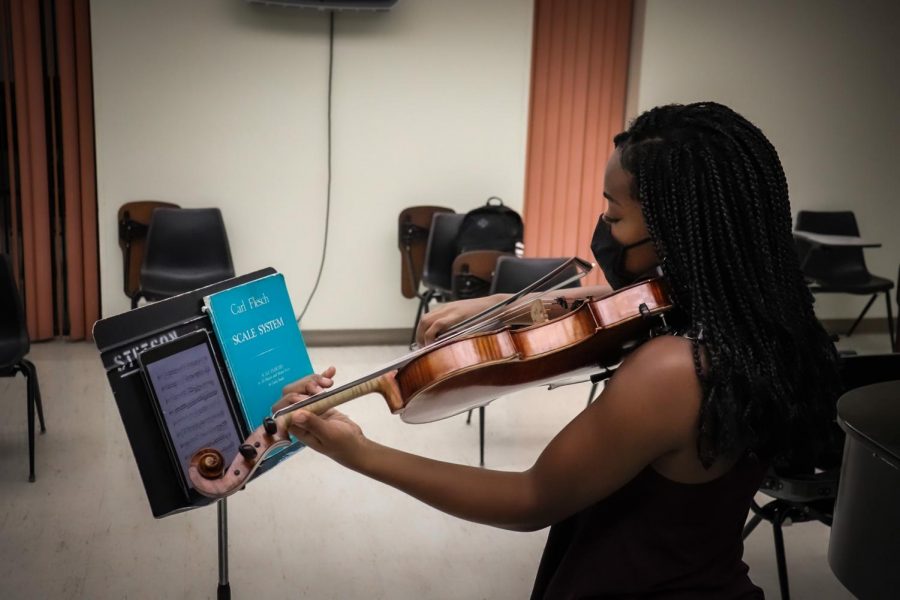 Wake up at 9 a.m., first class starts at 9:45 on Zoom; quick lunch at 12; repertoire lesson from 12:30 to 1 in Presser Hall; concert choir rehearsal from 1:30 to 2:45 in the LBC parking lot; studio from 3:15 to 4:15 in Lee Chapel; another hour or so of practicing; finally, dinner around 6:30 p.m. and two more hours of homework. Sounds exhausting, right? If you were a vocal major in the School of Music, this could be an average Thursday for you.

This schedule is just a typical day in the life of vocalist Roxana Triana (‘23), but it still reflects the basis of most music majors here at Stetson. Their itineraries commonly consist of around nine to 10 classes a semester (amounting to around 20 credit hours in total), varying from online to in-person, or a hybrid of both. These courseloads have been consistent since before the era of COVID-19. Non-music majors, in comparison, usually have around 16 credit hours made out of four or five classes typically.

“One of the main reasons why we have so many classes and not a lot of credits is because a lot of them are worth zero credits,” says Triana.

Adjusting to college life puts a strain on any student, but learning about the strict regime that music students navigate every semester made my schedule as an English major seem like a cakewalk. But for those students who put their soul into their work, day in and day out, it’s part of their everyday life. Just as athletes hurdle the obstacles of academics and training, musicians compose their way through the barriers of academics and practicing.

Given the circumstances, this year has seen an incredible amount of change for everyone on campus. Adapting to online classes with the nation undergoing political mayhem and a pandemic that seems to bring out every possible complication has not been an easy adjustment.

For the music department, these changes have affected students in a myriad of ways. Most music courses are based on in-person coaching and collaboration; the move to online learning has cut off a good amount of face-to-face learning that is key to the experience of the program. The new setup of classes has forced their schedules to be more spread out than before, meaning their days are longer because of new gaps between classes. While these gaps would seem to allow more time to relax and ease the mind, they tend to become 15-minute or so breaks where students decide what they can get done before their next class, in hopes of lessening the workload of what they may or may not have time to do later.

“A lot of things just take out more time and much more energy than it would have been when it was already so time consuming to be a music major,” Elené Okruashvili (‘22), a pianist, explains.

When days begin early and end late, week after week, it gets exhausting for music majors— with or without a global pandemic to also worry about. Even so, some students take the rigorous schedules with stride. Instead of feeling stressed, they miss the social connection now more than ever.

“We’ve kind of lost that sense of community that I was so accustomed to,” says Victor Zayas (‘23), a tuba player. With more strict guidelines to follow when in person and less face-to-face time to practice in general, the music department as a whole seems to be feeling the lack of interaction that previously they thrived so much on.

The Dean of the School of Music, Timothy Peter, D.MA, commented on how this secluded style of teaching has affected the process of making music. “How we make music through experiential learning is truly in a human form… we miss how it was delivered, and we missed being together, learning about music and making music, in contrast to everybody isolated alone,” he said.

One aspect that has furthered the feeling of isolation has been the lack of an audience. Alex Ortiz Velez (‘24), a music composition major, explained, “we are always already struggling to get an audience with or without COVID. Because, you know, we don’t perform— people perform the piece for us. So, it’s a challenge of finding people to play for us and an added challenge of getting an audience.”

However, this isolation hasn’t stopped artists from finding safe ways to share their creativity. With fewer audiences in person, more people are moving online to share their work. Nathan West (‘22) comments, “[this allows for us to find] ways to connect with people that you probably wouldn’t be able to in person.” Performing without audiences also helps those musicians who have minor to severe stage fright and allows them more time to get to know the materials and their fellow classmates.

It is also always important to keep mental health as a priority, especially when you’re juggling a dozen classes. For Velez, self-care comes in the form of spare time. “Every time I wake up in the morning, I have an hour to read or listen to some music. I also play vinyl because, you know, as musicians, we often forget to listen to music for fun.” Others deal with added stress by making it known. Zaria Graves (‘22), a violist, takes the route of asking for help when she’s overwhelmed. Her advice is that the best tool is “communication with the teachers when you’re getting stressed and because most of the time they want to help you.”

Amid all the change that 2020 has brought, professors and students alike have had to scramble their way through a wave of new technology. In the world of music, the challenge of latency—the delay of audio during calls such as Zoom or Microsoft Teams meetings— has been an obstacle that professors and students have had to overcome. For musicians, this means that practicing together online is virtually impossible. To tackle this new obstacle, Assistant Professor of Music Chadley Ballantyne, D.MA, has been spearheading the use of SoundJack, an online tool that significantly lowers latency for coaching and collaboration.

It is new techniques like this that have become a cornerstone of this semester; the past few months have served as a testing ground for the entire campus to adapt to. Some of these strategies have proved to be useful enough to continue using in future semesters when COVID-19 isn’t as prevalent as it is right now.

Okruashvili mentioned how sanitizing workspaces and practice rooms is a tool that she believes we should have been using beforehand. “I personally appreciate how we all have to sanitize the practice rooms after every use by ourselves,” she said. In hindsight, it does seem like the kind of thing we could have been doing before we were forced to.

Beyond better sanitation habits, recording performances have become part of the new normal this year, whereas beforehand, the only performances that were recorded were the end of the year concerts and recitals. Now, with in-person performances being more rare, nearly every piece and performance is recorded. While it took some getting used to, most students admit that the newfound strategy has its upsides.

“I myself ended up with a couple of great recordings that I immediately added to my portfolio that I probably would have just performed live and would not get such a good quality recording of those performances,” Okruashvili commented.

Endurance has been a common quality on campus this year. Isabel Barbato (‘23), a choir student, offers a few words of advice for fellow students, both in the music department or otherwise: “Know that you’re not alone in the stress and worry.” This year has made the strenuous lives of every college student all the more difficult, but if nothing else, we know we’re not the only ones going through it.

The School of Music has persevered along with the rest of the campus, and they’ve created new and unique methods to overcome the difficulties that COVID-19 has brought on. Dr. Ballantyne was adamant with his comments attributing the success of the department to the students and their willingness to overcome any obstacle: “[The students] have been remarkable in their resilience,” he stated.

Though it’s harder to find an audience, and classes take more time and effort to plan, the students of our music department are still working as hard as ever for their art. In the meantime, check out their YouTube page, Stetson School of Music.