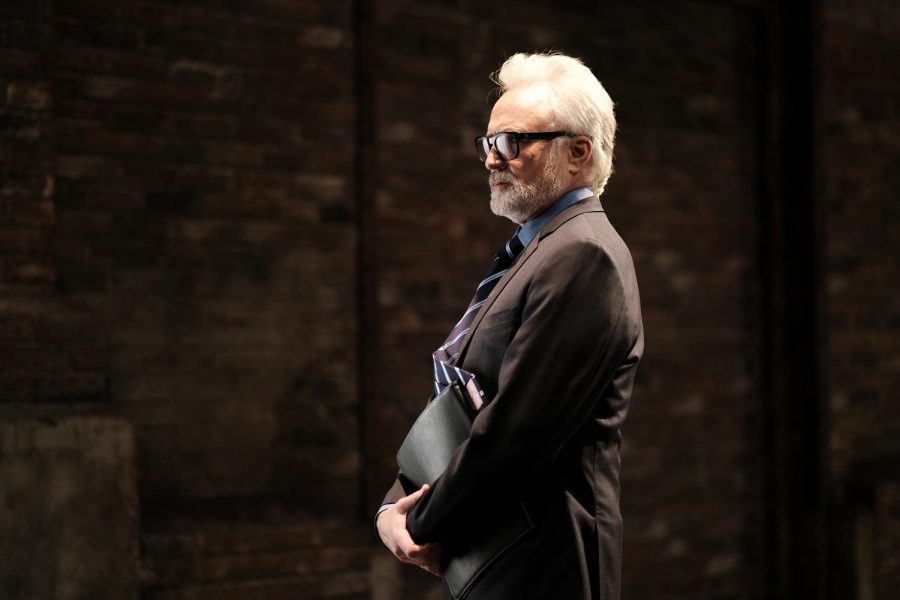 We sat down with “The West Wing” star Bradley Whitford, who recently reprised his role as Josh Lynman for a special reading of “Hartsfield’s Landing,” an episode from the show’s third season, in partnership with Michelle Obama’s organization When We All Vote in anticipation of Election Day. Whitford gave Hatter Network an inside look into the filming of the recent HBO Max special, his time on the show, and the importance of young people to vote.

Editor’s Note: This conversation was edited for grammar, length, and clarity.

Hatter Network: How was it performing the episode “Hartsfield’s Landing?” What is it about that episode that you think made it a good choice to bring the show back after years off the air?

Bradley Whitford: Yeah, you know, I was actually— we always get asked: what’s your favorite episode? And people—it’s usually something like “In Excelsis Deo,” or “Two Cathedrals” or “Noël.” You know, nobody says “Hartsfield’s Landing,” and weirdly, like a lot of actors, I’ve maybe seen 40% of them. So I’ve seen a bunch of the episodes, but I literally had never seen this episode…and it reminded me of how incredibly lucky we were to be able to do a show that aspired to that sort of level of storytelling and a non-cynical embrace of democracy.

And I think it’s a great episode, because it’s about, it’s basically, for my character, it’s about sort of embracing democracy outside of partisanship. Josh gets to the point—he’s getting all freaked out about what’s happening in Hartsfield’s Landing and he ends up with, ‘You know, just let them vote.’ And so I thought it [the episode] was a really good choice. It was very bizarre to go back, and we’re a very close cast. We love each other.

HN: How was it like partnering with When We All Vote?

BW: I know in Mississippi and absolutely in Florida, and it is absolutely true in Wisconsin, they’ve totally normalized voter suppression as an acceptable strategy, which I just find obscene. So for me to be able to do this wonderful story—which is about not taking the right to vote and the power of voting for granted—you know, to support an organization that is focused on making sure people can vote made me feel very, very lucky.

HN: You are so right about the voter suppression. Just at Stetson, we’ve been talking about making sure everyone’s ready to vote and that everyone has a plan and making that very accessible.

BW: I’m telling you, I mean, Florida is going to be tight. I get upset because young people will look at the statistics of young turnout, and it’ll be low. And they’ll say, well, “young people aren’t trying to vote” and that’s absolutely not true. All the voter suppression is aimed at making it difficult for young people who live in one place, go to school in another, to get confused about where they should register, how they should register, whether they need IDs or not.

I find young people’s involvement now, it’s inspiring to me. I’m glad that they’re—in a time when they could become cynical given the world we are handing to them and a political process that is very ugly right now—that they are not falling prey to what is the goal of all this voter suppression, which is to make people think that their vote doesn’t matter when it actually does. They wouldn’t be trying to suppress your vote if they didn’t know how important it was. So, I’m glad students are doing that.

HN: I have a few more questions about “The West Wing” special. So with Sterling K. Brown, it was huge that he was replacing the role of John Spencer’s character, Leo. How was your experience of working with Sterling running over those lines?

BW: John and I went way way back. John was like a father to me…I had known John forever. I was very, very close to John. I loved John. I got a call that John was in trouble and got to his bed just after he died. John means the world to me. And when I heard it was Sterling, I thought, ‘Oh my God, that’s great, Johnny would love that.’ And then we had one Zoom rehearsal… and we read through it and Sterling just started talking and I just, I just started crying because it brought John back. And Sterling is just so truthful and soulful, you know, in a way that John was.

HN: One of my favorite parts of this special is the little moments that are in between the episode where the commercials would be where they teamed everyone up with someone and you talked about voting, and you did yours with Marlee Matlin, where she told a funny story about how you used to keep a bunny under your desk. How was it like filming that with her and getting to read that funny script? Whose idea was that? Was that Aaron Sorkin’s idea?

BW: Yes, yeah, yeah, that was Aaron. Marlee Matlin is one of my favorite human beings on the planet. She is the most grounded, hilarious human being. Our kids went to the same school. Her husband is a retired cop. She’s just one of my favorite people and her interpreter, Jack Jason– that’s an amazing relationship. So, I was thrilled when I heard that it was going to be Marlee.

By the way, Tommy had this very kind of complicated introduction that we spent a lot of time working on, and then she kind of realized, this really doesn’t work. And it’s a very last minute —the night before the last day, when I was shooting most of my stuff. They said, “you’re gonna have to do this.” We’re just gonna do a totally simple intro. And nobody else is here, because everybody was basically shot out. So at the end of the day, you’re asked to do this thing. And I’m like, what is it? It’s not much, it’s just, you know, just some brief word [and] like, I can’t memorize it in an hour, you better get a teleprompter. And sure enough, Aaron wrote that intro, which we were shooting at the end, like, very end of the day, along with Marlee’s stuff. So, I was a little punchy by the time we shot that.

HN: Do you have a favorite memory on set during the run of “The West Wing?”

BW: Yeah. There was an incredibly magical moment. You know, the episode “Noël” where I freak out?

HN: That’s one of my favorite episodes.

BW: We’re shooting the thing with Yo-Yo Ma. And Yo-Yo Ma is the sweetest human being in the world. He walks in. You’ve got probably 100 background artists. And he walks in with his cello, which is literally priceless…and he walks in, holds the cello up, and goes “Anybody want to play it?” And people were playing his cello.

And then all he had to do was play this thing that I, before that episode, thought was the most beautiful piece of music. And all he had to do was play it once. We recorded it and he said, ‘No, no, I want to play it as much as I can.’ So, he ended up playing it like 20 times, and in between takes, at one point he would start improvising on the cello. And Dulé Hill [ who plays Charlie Young] is one of the greatest tap dancers on the planet…and the moment that everybody remembers was Yo-Yo Ma improvising while Dulé tapped and then the panning back and forth in the shot is just incredible.

HN: Oh, I love that. That’s such a good story. That’s just such a brilliant episode too. I finished the show a few months ago, then I got my little brother who’s 15 to watch, because he’s getting to the age where he’s curious about politics and he just watched that episode. We had a little conversation about it. I think that’s one of your best performances and Aaron’s writing too.

BW: Such a good episode, and I keep saying what people don’t understand, what Aaron did, will never happen again. Aaron was doing 22 episodes a year. Almost nobody does that, right?

Every year and a half, he’s doing 22-hour long episodes, which is the equivalent of 11 feature films every year, for four years, where the complexity of the writing on this show is extraordinary. And, you know, we were one of the first shows that, you know– The Sopranos… was as good as any mob movie, if not better. And West Wing was as good as any sort of political film. So the piece of that, the fact that Aaron was writing 22 episodes a year for four years, is, you know– in episodes like this, that [I’ve] totally forgotten about that. Yeah, I mean, you cannot overstate what he did, it just boggles my mind. And later, after he left, I got to actually write a couple. Yeah, I was gonna die.

HN: Didn’t you write a couple in season six? The one thing that I can remember is, you made Josh Malina say that he’s a terrible actor. I think that was one of your episodes?

BW: Yeah. That’s the greatest achievement of my life.

Yeah. I wrote two episodes. “Internal Displacement” was the name of one. And I forget the name. But it’s so hard. And, you know, I had a year in between.

HN: So where do you think [Donna and Josh] would be in their relationship now, with marriage, whether they have kids. Where would Donna and Josh be in 2020?

BW: I would hope that they have a couple of kids that are probably 15, 16, 17. I would hope that, when Josh acknowledged what everybody knew was the truth about his love for her, and his kind of acknowledgment of her strength as an independent person, I would hope he would be a little less of an unconscious, sexist pig. And maybe, maybe he was a consultant for a while then realized she was going to law school, I’ll raise the kids. And I don’t know, maybe Donna Moss is going to run for office.

Check out this story and much more on the election in Issue 2 of The Reporter, available now here.