A New University Logo: NO TESTS 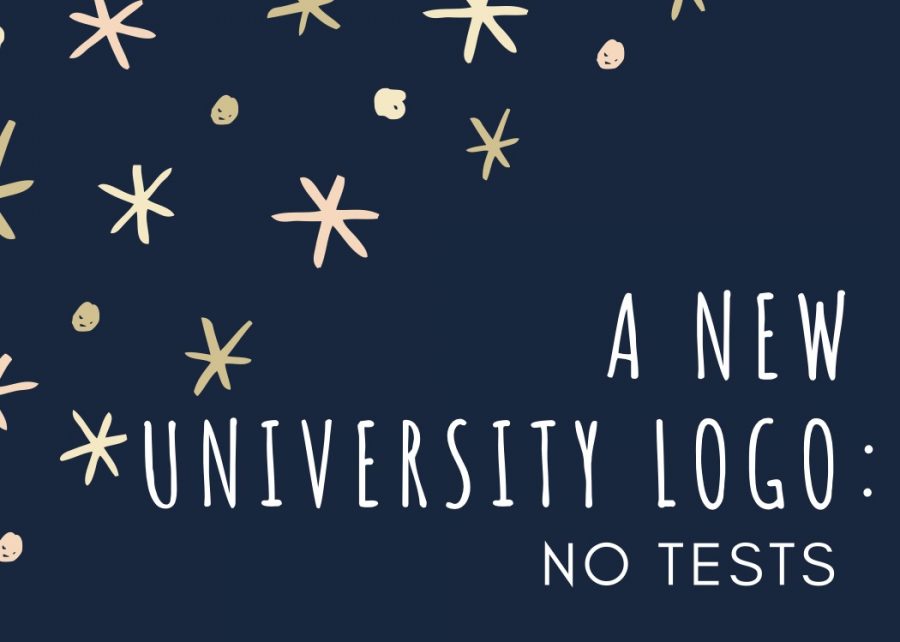 Maybe it was all the grading that made me see things backward…. Maybe it was just mid-semester fatigue…. Or maybe it was a mental symptom of the novel coronavirus….

Staring up from the papers and books, the Stetson University logo caught my eye. We’ve all seen it: those familiar seven big green letters on the university seal, or with the word “University” holding them up and braced by a big elegant dot on each side, or next to one big S with a swoosh in the middle. I saw the word, “STETSON,” as I had seen it many times, but now, as if with a Rorschach test in reverse, I saw it with new eyes….

The green shapes floated and bobbed before my eyes. The letters in reverse seemed to grope toward a message, as if with words that were waiting to be spoken: NOSTETS. I rubbed my eyes…. No, what?

It didn’t make sense; maybe it was nothing. Back to grading…. But the letters kept calling out…. They danced around each other, and then it hit me like a ton of blue books: NO TESTS!

Was it wish fulfillment? What could be a greater wish when swamped in grading than to wish for … no tests—no essays to grade—no more answers to scrutinize—no more grading! And then I realized: The was no simple wish or idle dream. It was an inspiration that needed to be broadcast from the height of The Rock and beyond.

How can a mid-sized liberal arts college with a former denominational affiliation distinguish itself in a crowded educational marketplace? What can we do here that will so catch the eyes of prospective students that they will crave their studies here? What do students really want? These have been the questions of countless questionnaires and administrative meetings. The answer was simplicity itself: NO TESTS.

My daydream insight became a proposal that was quickly snapped up by the administration. The president immediately declared, “This expresses our highest mission and our goal for educating students for future careers without the impediment of teachers scoring students,” and the word went out for the phrase to be installed as a watermark logo with the slogan: “Think Forward with Stetson University: NO TESTS.”

A senior Vice President added, “Those grades? Well, they are just an insult to our customers.” A chief financial officer summarized the new university policy: “We want more students; students don’t want tests—it’s a slam dunk.”

The deans of each school eagerly implemented the policy to eliminate all tests, exams, and papers from the curriculum, and the Dean of Students pointed out that in daring to take this bold step, “the university is well-positioned to dare students to be significant.”

Effective immediately, Stetson will no longer have any work to be graded. The Reporter has obtained a copy of a president’s staff report, which reads in part: “The change is a win-win: we can give teachers and students alike more of what they really want: a friendly atmosphere, more time for (all) parties, and NO TESTS.”

Professors are reported to be delighted with the change; “we entered the profession for the ideas we love—not for the testing,” one said grandly. “We never liked that grading stuff anyway,” another emphasized gruffly. The College Dean declared that the “no testing” policy was in keeping with “the finest ideals of the liberal arts: learning for learning’s sake.” The School of Music Dean said, “It’s all about performance—who can grade a show!” The School of Business Dean simply stated, “we have found our niche.”

One admissions counselor reported that the new logo expressed the sentiments already key to recruitment publicity: “we have been avoiding references to tests for years; now at least we can be more upfront about it.”

Applications have soared, and current students are delighted with the change. A comment from a third-year has been typical: “what was the point of those tests anyway? Didn’t they just trust that we would study?” A fifth-year discovery student, however, paid little attention to the change: “what’s the big deal? I never studied for those things anyway.”

The administration has set up Visioning Meetings, with seats six feet apart, while others attend digitally, to study these policies. Comprised of representatives from the faculty, students, and staff, this conclave of campus leaders is considering what they are calling the Fifteen-Week Plan: Lessons Learned from the Corona Pandemic. Some leaked notes reveal the gist of the discussions so far: “Considering the progress we have made by eliminating tests; we can apply that same forward-thinking to the elimination of class meetings during the whole fifteen weeks of each semester.” On the way out of the most recent meeting, a student representative was overheard saying, “I just want the degree; let’s just focus on getting our degrees.”

The Office of University Marketing has issued a press release: “The Visioning Conclave will announce its decision according to social distancing protocols with black smoke if classes are to be optional, white smoke if reading is to be deemed optional, and green smoke if elimination of the requirements for each of these conventions of traditional education is to be the new policy of the university.”

Meanwhile, the Reverse Thinking Subcommittee of the Visioning Conclave is exploring the marketing potential for SEULAV and ECNACIFINGIS.

-Cruz P. Joseph teaches and still give tests in History and American Studies; contact him you can at [email protected]