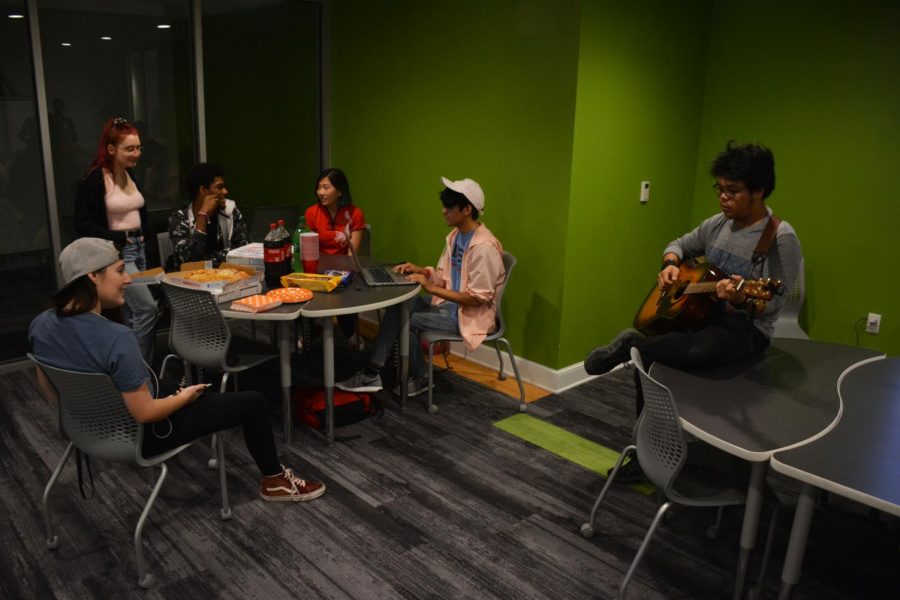 Touchstone's first ever Creative Corner at the Collaboratorium.

The Creative Corner hosted by Touchstone on Thursday, Nov. 14 was a big hit among the artistic minds on campus. Students interested in all forms of art gathered in the Collaboratorium for the first ever Creative Corner to hang out, eat food, show their artistic passions, and talk.

The event presented a casual and earnest atmosphere and encouraged open creativity from the students present. There were plenty of laughs and expressions of talent from students interested in poetry, prose, and other forms of writing, visual art, singing, and musical instruments. Students worked on writing, some were simply spectators, and one person performed music.

Dennis Claros (’22) is one student who plays guitar and sings, often performing at Uncouth Hour, which takes place on Thursday nights from 9:30-10:30 p.m. in the Carlton Union Building (CUB) Garage. He very much enjoyed the Creative Corner, saying, “I’m having fun. I’m back playing my guitar again, and I’m going to do it again tonight for Uncouth [Hour], so that’s exciting.”

About Creative Corner, Claros said, “I do want [Creative Corner] to keep happening, because I just get to hang out with a bunch of people that I get to use my guitar around, that sort of thing.”

Jacob Mauser (‘20), Executive Editor of “Touchstone” Literary and Arts Journal, was the man in charge and ran the Creative Corner. His inspiration for this event came from an art movement in the 20th century: “I was thinking about the art movement in the 1960s, ‘70s, and into the ‘80s…I thought there probably used to be cool art workshops. One gets the idea of people hanging out and wandering apartments in Greenwich Village, so I was like, ‘well, we could do that.’” Mauser said, “We could just have people come together to talk about art for a solid hour or so to bring their projects and that sort of thing.”

Mauser hopes overall to encourage artistic expression in students: “I like the idea of making people’s art accessible to other people. I think people who do art frequently do so with the intent of showing it to people, even if that’s not really what happens, and I’d like to help people with that.”

He also hopes to see students’ submissions to “Touchstone”, so go to https://touchstoneliteraryarts.submittable.com/submit and you could be featured in this year’s issue.

Creative Corners will keep happening next semester, so look out for news about that and bring your art to share!