How far can social media go about listening to our seemingly private conversations before we are forced to fight back? 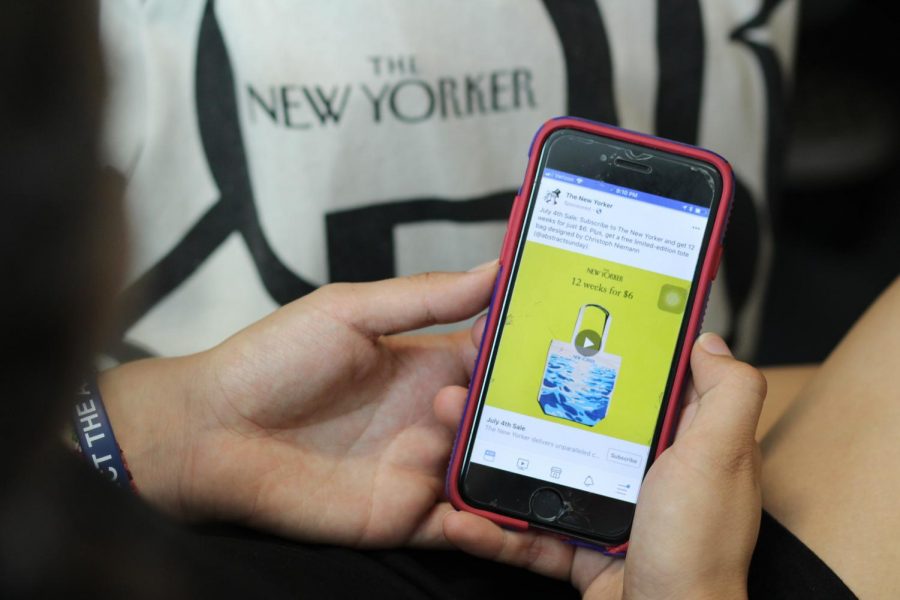 In the final season of the show “Parks and Recreation,” released in 2015, viewers are exposed to NBC’s vision of the future. The year 2017, according to the “Parks and Rec” writers, seems to be a spin-off of “1984,” but instead of Big Brother watching over, Pawnee has a 21st century Silicon Valley-esque company called Gryzzl, one that admits to data-mining its consumers.

Viewers first recognize Gryzzl’s impact when the business puts “Gryzzlboxes” outside of homes around Pawnee, consisting of items that specifically relate to the people that live inside. The show’s protagonist, government bureaucrat Leslie Knope, for example, received a book written by her favorite politician, Joe Biden, and a poster of Supreme Court Justices sipping the “Friends” milkshake, items that longtime viewers of the show will know to be perfect for her.

“There’s nothing scary about Gryzzl,” Roscoe, the “vice president of cool shizz” of the company said, “We just want to learn everything about everyone, and track them wherever they go and anticipate what they’re about to do.”

However, as merely fans of “Parks and Rec,” we craned our necks, squinted our eyes, and shook our heads, thinking about how strange this was. How creepy is it that a company can have so much of Pawnee citizens’ data? How ignorant can these people be to give away such private information, for free, for a company to use and abuse it? And maybe most importantly, how did people like Knope and her husband, Ben Wyatt, really intelligent government employees, let this happen?

For me, it was July 2019, when Netflix released “The Great Hack”: a documentary that demonstrates the effects that apps like Facebook and Instagram can have on influencing our behavior, as well as the vast amounts of data they have on us. It begins with Professor David Carroll of The New School in New York City, who, as we soon learn, has sued UK-based company Cambridge Analytica by demanding to see the data that they had on him.

As the film goes on, we realize that the firm had ties with both President Donald Trump’s 2016 presidential campaign and Senator Ted Cruz’s 2018 senate campaign, using data harvested from Facebook to create “detailed personality profiles on every adult in the United States” according to WIRED. From there, the company was able to figure out the kinds of voters that could be “easily persuaded.” With this information, Cambridge Analytica could candidly target ads to these Facebook users, using phrases, including, but not limited to, “Don’t you care about your freedom?” and “Lock [Hillary] up” to convince those who could be quickly swayed to vote conservatively.

Due to these extreme violations of privacy, by May of 2018, Cambridge Analytica had shut down, yet it still led me to wonder: what kind of information does Facebook typically store on a user? To find out, I decided to do a quick Google search to learn how to access that data, and from the site’s settings, I was able to download a file with everything from 2015 (when I opened my account) to 2019.

Opening the file, I noticed that it was rife with folders like “your posts,” “photos and videos,” and others that had to with my personal Facebook account, information that seemed “normal” to have on me. However, as I kept scrolling, I saw I folder called “ads,” and within this folder, a link to “advertisers_who_uploaded_a_contact_list_with_your_information.” I followed the link and got to a page that said:

Not to disregard the stalker-ish notion of these actions, but due to my personal interests, it made sense why companies like The New Yorker or The New York Times might have my contact information. However, when I saw that companies like “Toyota of Hackensack” (where is Hackensack?) or that “Rebekah Brown – State Farm Agent” had that same data, I was freaked out and confused, wondering how I and, assumedly, so many others, blindly signed away our rights like that.

Knowing all this, it’s really easy to think that because we’ve already given up vast personal data to these tech companies, for most of us, years ago, there’s nothing we can do about it now. But there’s also the all too familiar American apathy of not caring about something until it directly affects you, or someone near you. I attended high school in West Palm Beach, Florida, approximately 45 minutes away from Parkland, and although 2018 had rampant school shootings, it was only after the shooting at Marjory Stoneman Douglas when my school began to crack down on its security measures.

However, it’s so important to get out of the mindset of pushing issues like this to a back burner and saying that “it’s a problem for a future self” because, with corruption done by Cambridge Analytica, we’ve already seen the kinds of effects that a lack of data ownership can have, not just personally, but internationally as well. Domestically, there have already been steps taken in the right direction for us to begin own our personal data. The Data Care Act, introduced in December of 2018 “is designed to protect users information online and penalize companies that do not properly safeguard such data,” according to The National Law Review.

This bill plans to “[…] establish three basic duties, including the duty of care, the duty of loyalty, and the duty of confidentiality,” giving us ownership over basic data rights like our “social security number, driver’s license number, passport or military identification number, and account information such as username and password.”

Overt as it may be to say, but our world changes every single day, and faster than it ever has before. In Ben Kenigsberg’s New York Times review of “The Great Hack,” he openly states the fears he felt after watching the documentary: “Why am I even using the internet? Why is Twitter open on another tab? Wouldn’t it be smarter to disconnect, move to the woods and live off the land?” And although these anxieties are warranted, right now, we’re in too deep to consider them.

Starting today, I vow to take control over my data, to begin to learn what information what tech companies have on me, and to realize that in some cases, there’s very little I can do about it. But, I will promise to be more cautious in the apps that I download and the firms that have my information. I will take as much ownership as I can so future companies have less and less possession over who I am. And that’s tangible; because I really don’t want to live in a 21st century version of “1984.” Do you?

Keep In Mind as you Scroll
We’ve all had that moment of realization that all of our devices are probably listening to every word we say. Something we were just talking about suddenly shows up as an ad on Facebook. And then Instagram. And then all over our internet browsers.

We live in a surveillance society where our privacy is a major concern. While surveillance can serve to help us, they can also set us at a disadvantage. Here are some things to consider when it comes to internet surveillance.

Your online activity and browsing history can be tracked through websites. This is done to personalize what you see online and is typically compiled into a database, but most people might question if websites should have the ability to track your activity, even if it personalizes the content that you see. Would you want the websites you visit to know and keep track of what you search, even if you aren’t doing anything wrong? This could be considered an invasion of privacy.
Advertisers may use your information and activity for their benefit. This is often without your knowledge. Advertising companies can track online behavior to use to their advantage. This information can also be sold to other companies. And in many cases, consumers do not know. You may want your privacy protected, but companies may want to capitalize on your information.
Your private information may be kept for questionable or unknown purposes, and can even be sold. Facebook and Amazon are great example of this. Facebook faced a scandal when the information of more than 50 million people were sold unknowingly to Cambridge Analytica, a data analytics firm. It was discovered that Amazon workers were possibly listening in to what customers say to the Echo speakers, in addition to the Alexa function already listening as well. It becomes an invasion of privacy when users are unaware that they are being listened to, or when their personal information is being sold through social media platforms where it is their impression that their activity is not being shared with others.
Your location can be tracked. Oftentimes, social media applications may track your location, sometimes when they need it and sometimes when they don’t . It comes in handy many times if it is the function of the app. But I wouldn’t be comfortable with an application knowing where I am and what I’m doing if there is no practical use except to know my location for no apparent reason. This all boils down to privacy. Although we may click “agree” to the terms and conditions that give access to our information, it comes down to a question of whether it is ethically correct that our private information is readily available to anyone who may want it, even unknowingly.