Join Jacob as he interviews Sudeep Maiti about his creative experience and sources of inspiration. 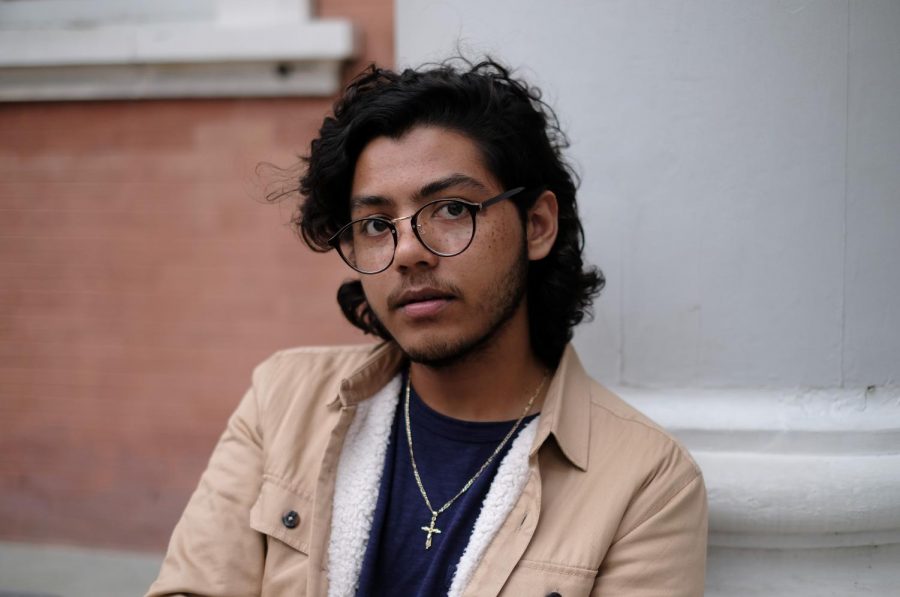 Some of the questions have been edited for brevity and clarity. Original interview conducted December 2018.
Who or what inspires you to create music?
Many things. My grandpa was a musician when I was little- he’s always been a musician, he passed away when I was little. Ever since I started to discover more about my family’s past, specifically about my grandpa, it just motivates me to do what he did. And, just like the movements and events that are going on today, I feel like the best that I can do to do something for society or to make something for it is to make music.

So you definitely see art as a way to enforce social change?
Definitely, definitely.

How have those influences entered your music?
I believe that music is experiences- our experiences. For example, take John Lennon. He was a great musician, and he took what he saw and what he lived into music. And it was not about riches or how many houses or cars he had, it was about what he thought he could have done for society. And of course you’ve gotta start somewhere, and I feel like the best that we can do is talk about our own personal experiences at the moment so we can expand and create it into something bigger, and that’s what John Lennon did.

Can you think back to a pivotal moment in your artistic career? Something important, an instant where you thought, “this is what I might want to do.”
I remember when I was performing for the first time- I was like 9 years old, and I started playing the drums- and I remember that I was at a gig, and the first time I hit the drums live, I felt like the energy of the audience really fill me up. That was the moment when I was like, “ok, I can do something with this.” And then last year, when I released my first EP, Red, one friend came up to me and said, “I cried to your songs,” and I said, “wow, really? Why?” And she said, “I dunno, I just really felt it.” And that’s when I knew that I could touch people with my music, and that’s what I wanted to do for the rest of my life.

Can you speak to the challenges of putting your music out there, releasing your albums?
I feel like every time you put music out there you put yourself out there in the most personal way. You never really know how people are gonna react to it, but I think that what is important is what you think of it. You cannot be afraid of what other people think and how that is going to impact you. What you can do best is push through the deep thoughts and just go for it.

If you could work in a different kind of art, what do you think that would be?
Definitely photography. I feel like photography captures the emotions of people in a visual way, whereas with music you can transmit feelings, but sometimes it takes a while to do that, to obtain that perception of that special emotion. With photography, especially natural photography, nothing edited, you can truly capture the essence of the person and what they’re going through at the moment. I think that’s really cool. I’ve always wanted to take courses on it, and I’ve taken pictures of my friends lots of times and I truly put them in a position, when you’re behind the camera and you’re saying “do this,” or “do this,” because you know what you wanna capture, because you know what they’re going through.

What other art are you into right now? Any other music, literature, that sort of thing.
I like sculptures a lot as well. I’m very into the classic Roman and Greek sculptures, I think the way they capture the skin, specifically. You can see the marks of when someone is touching someone. I feel like that is beautiful, and I don’t know how we could do that before. And I don’t think that’s something that we should leave behind in the past.

What themes draw you in? Is there anything that you keep returning to?
You know how they say, “musicians are just people with broken hearts?” I feel like that is true, sadly. What I try to do with my music is what keeps me going through the day. When I have a tough day and I’m at the end of the day by myself, trying to make a song, and it just doesn’t work, I think to myself, “ok, how did I end up in here in my room, trying to make a song?” It helps your imagination fly and go into places you never experienced before. I think that as humans we should be more in touch with ourselves. We’re always in touch with worldly things. We write about the trees, or other people. Don’t you ever find it hard to write about yourself? It’s one of the hardest things. I feel like that’s one of the things that I’m trying to get back into. I think that’s an experience that people really connect to. Not in an egocentric way, but say for instance you’re going through a heartbreak… it’s different when you write a song about “I went through a heartbreak, she took her stuff from my house,” because that’s something you see, versus “this is how I felt when those things were happening.”

What do you do when you lose inspiration?
This whole semester I’ve been trying to gain inspiration from anything, really. It’s just been so hard with schoolwork and trying to balance that out. Where do I gain inspiration from, you ask? I say performing live. It always gives me that push to write more music. It’s just a different thing, when you’re up there on stage and you see all the people looking at you or just passing by, and you can send something to them. I feel like that, to me, motivates me.

Can you speak to any major challenges that have put a hold on your motivation to create?
Well definitely school. But I cannot say that, right?

You can say that.
Then yeah, school. School is definitely a thing because of time. Whenever I’m on vacation, I can write and write for days. There’s no way that I stop myself because of anything else. But school is the main issue I see so far. Sometimes you’re just in a terrible mood, and all you wanna do is go home, relax… I don’t write music when I’m stressed to the point of exploding. I just grab my guitar and start to jam, without even thinking about it.

Which of your albums do you think best describes you, if you had to pick one?
Honestly it depends on my mood. Each album or EP is like a phase. So the first phase was exploration, take for instance the song “Bells of Salem.” It’s about feeling like “ok, I finally did it.” Not as in, “I made it,” but as in, “I finally put myself out there, I showed myself to everyone,” and it’s a start. Blue is definitely a sad EP, because you can find heartbreak and incredible amounts of pain in there, but you can also find hope in it. Whereas in Pink it’s a fresh start, starting from scratch. I gotta go back to where I started. And if I had to pick one, my Pink album is my favorite one I’ve made so far. I feel like it has everything in it. The lyrics might seem too specific, since it talks about a heartbreak, but it’s really not.

So you just released Pink. You don’t have to say, but do you have anything that you’re thinking about doing next?
Yeah, absolutely. I’ve been working on stuff this whole semester- like I said, I haven’t had much time to sit down, but just two weeks ago I started writing proper songs again, and I’m excited for what’s to come. I’ve discovered new sounds that I really want to explore, and I think that people will like.

Who’s your favorite artist in your field?
My favorite band of all time is Coldplay. Coldplay to me experiences everything. It’s surreal, it touches every part of my system every time I listen to them. They’re a great band for every specific mood. My favorite solo artist, at the moment, I would say is Harry Styles. His lyrics are so brutally honest that you wouldn’t even think he was in a boy band. I really look up to the way he writes his songs, and what they’re about.

One last question: if you had to describe yourself and your work in one or two short sentences, what would you say?
I’m just a guy who’s trying to show people what people go through, through his own music.

You can listen to Sudeep’s music here.