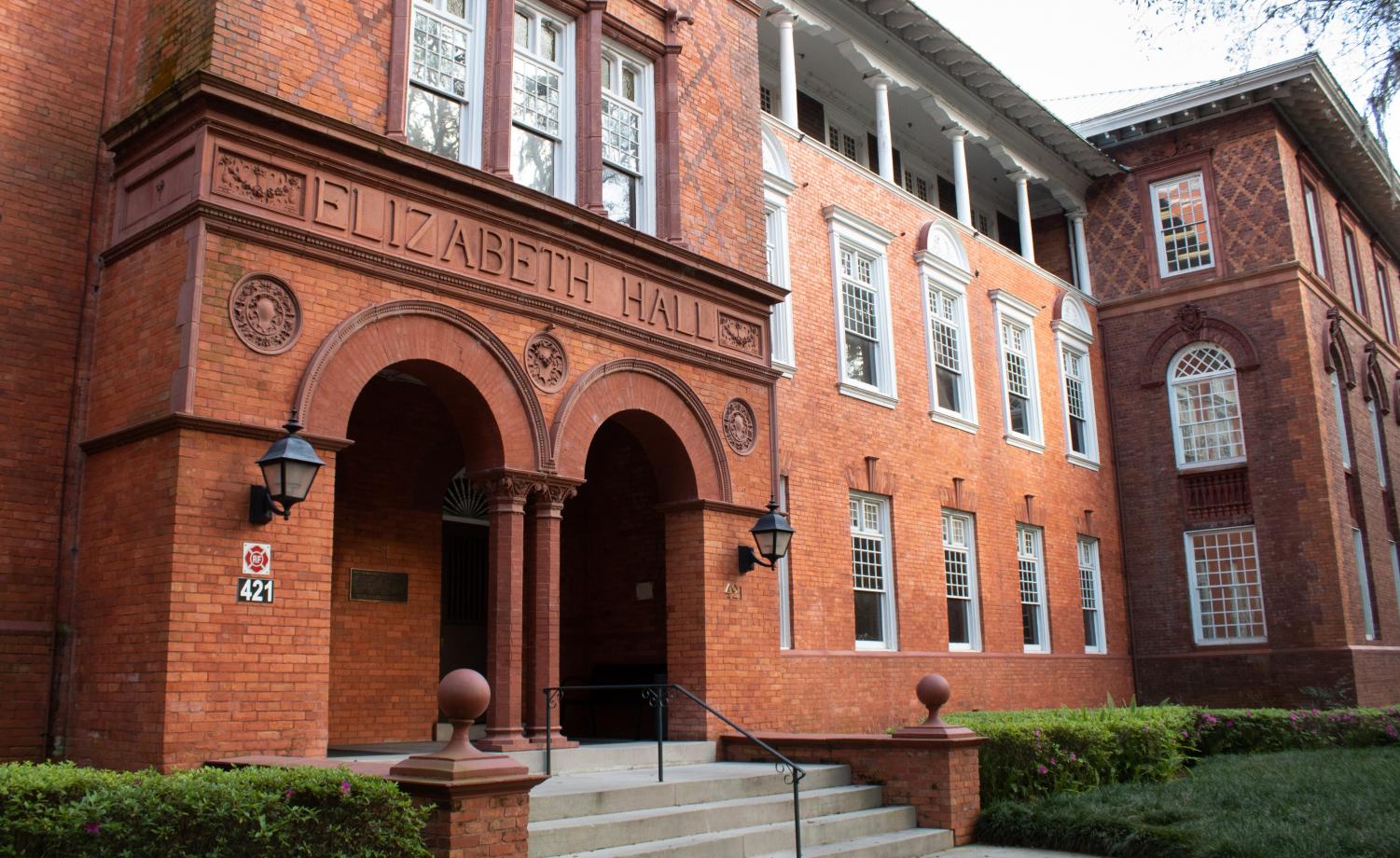 the problem with money, part II

Five years ago, something interesting happened here at Stetson University. There was a student protest over a $30,000 pile of rocks. Matthew Rafferty, a senior at the time, organized the “Occupy the Rock” protests in response to what he saw as a great injustice committed by the administration, which had made the decision to put tens of thousands into the installation of what we now know as the Rock, rather than putting the money into academics or into rehiring adjuncts, where he felt it belonged. For reference, these funds were restricted in nature, and thus could not have ever gone toward these things, but misinformation and a lack of clarity regarding these issues led students to believe that the funding could have been otherwise allocated.

At the time, over a hundred students rallied together with the shared perception that administrative priorities and the whims of the trustees and president were constantly taking precedence over the needs of the students and of the faculty, often over rational spending policies and over things that actually matter.

The Rock was unique in that it was a physical manifestation of administrative inefficiency—students had something to rally around that was concrete, rock solid, if you will—but it’s important to recognize that although current university issues don’t always have tangible signifiers, we are still experiencing them every day. In our billing statements, in our overfilled residence halls, in our sparsely-attended athletic events, and in future university policies that are on the table for debate.

So—where are the protests? Where is the student activism?

What are our tuition dollars buying us? As tuition and fees together break $60,000, are student, staff, and faculty needs actually being met? Based on the leaked 2014 Faculty Satisfaction Survey and the published results of the 2016 Campus Climate Survey, no. In response to the statement “The faculty has significant voice in regard to important institutional matters,” 65 percent of respondents, all faculty, disagreed or strongly disagreed; 61 percent disagreed or strongly disagreed with the statement “I think that faculty morale is good.” Staff feel that they do not have the time to complete the work they are given. Faculty feel overworked and undervalued, and overall as if there is no real weight given to their communication to both President Libby and the administration as a whole. Most disagreed with the statement that “the overall relationship between the faculty and administration is trusting” and over 80 percent believe that were they to speak up, there would be administrative retaliation.

This “trust deficit” between faculty and administration does not only impede communication, it also has a directly detrimental effect on the student experience. Especially as the student body continues to grow, important financial decisions are being made that, if not discussed with faculty, may result in their relationship becoming increasingly combative and bitter.

Students, though overall satisfied, remark that they have experienced sexual harassment, discrimination, and feeling as though they are disregarded by faculty and administration. Despite the fact that the outside corporation in charge of interpreting these results, Rankin & Associates, notes that they are on par with similar universities, the results point to overall institutional inefficiency in dealing with the most essential issues, and further, the most essential people—invested students who currently attend the university, committed faculty, and staff, whose voices about these issues must be heard. A marked increase in faculty senate meetings and increasing discussion of shared governance both indicate that this unrest continues.

Where, though, does this “trust deficit” stem from? Taking a look at the compiled comparative results from the last several years of Student Satisfaction Surveys may give us answers.

Given the chance to rank issues of importance, students consistently place athletics near dead last. “The intercollegiate athletic programs contribute to a strong sense of school spirit,” “[a] variety of intramural activities are offered,” and “[o]pportunity to play sports as a factor in the decision to enroll” are the three options given on the survey that relate explicitly to athletics. Students in 2017 ranked them, out of 98, in 88th, 89th, and 91st place, respectively. This placement is down from 2014. In other words, athletics have become less and less important to students, and yet, each year, Stetson puts $18 million into athletics, which is public information provided by Stetson to the Equity in Athletics Data Analysis (EADA) through the U.S. Department of Education.

As of 2015, the NCAA reported that only 24 schools out of 347 with Division I athletic programs generated more revenue than they had in expenses, and Stetson is one of the 93.1 percent of universities that takes a loss each year with its athletics investment. It is difficult, though, to fully understand just how great the loss actually is. NCAA guidelines concerning agreed upon reporting procedures of athletics revenue and expenses dictate that all sources of revenue are included in a budget report—including two categories called “Direct Institutional Support” and “Indirect Institutional Support,” which entail unrestricted funds allocated to the athletics department by the university, as well as “costs covered and services provided by the institution to athletics but not charged to athletics.”

Essentially, because a majority of colleges and universities take an annual net loss on their athletics programs, they rely on these categories of revenue, which include “direct and indirect support from general funds, student fees, and government appropriations” in order to provide funding to subsidize their athletics programs. This is why, if you look many universities up in the EADA Database, they seem to net zero. Their expenses and revenue are equal, down to the dollar. In Stetson’s case, the grand totals of revenues and expenses are both the same, $18,187,619. After subtracting financial aid given to athletes, which totals $5,906,356, this means that according to the most current report, Stetson spends $12,281,263 on its athletics program.

There is no publicly available data to show how much of this funding is subsidized by the university, but according to calculations by the NCAA, “the average annual deficit of a DI program is approximately $12 million.” Thus, we can safely infer that several million dollars are being lost annually on athletics-related ventures, at least. Yet, while averaging sports attendance over the last five years, I found that average attendance to home football games has fallen by two thirds, from over 5,500 to barely 2,000 per game. Attendance to women’s and men’s basketball games alike has fallen on average by 200 between 2014-2018 and 2012-2018, respectively.

I reached out to Jeff Altier, Stetson’s Director of Athletics, for insight on why this is occurring, and he credited it to a combination of athletic performance and upgrading the quality of what is televised. More people overall are watching sports on television, but in addition, games will not be as well attended if a particular team is performing below expectations based on previous seasons. However, he also commented that the athletics program serves as a “gathering point for community,” and that despite lower game attendance, according to a longitudinal study carried out by an outside corporation, “athletes bring other people in by increasing regional exposure.”

A Stetson alum himself, Altier understands the foundational value academics have to Stetson, and made the point that we are spending “more than we have ever spent on academics,” but also said that “athletics [are] a critical part of Stetson,” due to their ability to gain exposure–academic exposure is simply “miniscule in comparison.”

Through the Office of Development’s Online Giving page, Stetson states “Our athletic programs generate national attention, increased enrollment, and alumni engagement while contributing to greater student spirit, satisfaction and retention.” The archived Athletic Expansion Initiative page from when Stetson began its involvement in the Pioneer Football League in 2013 stated that adding football and lacrosse to the athletics program would “[i]ncrease enrollment (For each football player recruited, additional students will be attracted to campus, which is a major step toward our goal of growing enrollment to 3,000 students by 2016.)” In a conversation with Rebecca Thomas, Assistant Director of Sustainable Giving, and Mark Ernest, Director of Sustainable Giving, I found that the content on this page, though often finalized by Mark, is generally supplemented entirely by verbage provided through higher offices, such as that of Amy Gipson, Assistant Vice President for Development Strategy and Communications, and Jordan Foley, Stetson’s Web Editor.

Administrators at Stetson have called athletics one of the pillars of the student experience, and further, of increasing retention. Drawing from First Time in College (FTIC) Stetson Retention Data, this doesn’t appear to be true. The most recent public calculation of Stetson retention, in the fall of 2017, sits at 76.4 percent, hitting its lowest point since 1996. The last time retention hit 80 percent was in 2006, long before the football team was reinstated in 2013, and between 2013 and 2016, retention stagnated around 77 percent. With the economy on the upswing, and with the promise that athletics are a great contributing factor to increased retention, shouldn’t we be seeing more results? When asked about this, Jeff Altier said that, concerning athletics, we “cannot say whether there has been a positive or negative impact [on retention]” but that “the more you engage students…the higher their retention will be.”

Throughout the campaign of growth, more and more new programs have been arisen to increase retention rates. Vibrancy, Campus Life and Student Success (CLaSS), Academic Affairs, the Student Success Collaborative (SSC), and the Retention and Persistence Task Force Strategic Group have all been created or redirected to focus more efforts on policies and special attention that will increase retention rates. We are still seeing no results. If we want to increase our retention and continue to invest in new programs to do so, at what point do we question whether these worked when retention doesn’t go up? When do we decide that something does not work? When do we give up? Do we give up? What do students actually want?

If we are to reference, once again, the results from the student satisfaction surveys, it is incredibly clear that students value academics. They want the content of courses within their majors to be of value, they want strong instruction in their courses from faculty. Students want intellectual growth. These ideas all place in the top ten, consistently, from 2014 to 2017.

So students consistently value academics far over athletics, yet the institution continues to lose money investing in our athletics program and in other initiatives that have returned no significant results. Despite claims that athletics and these initiatives increase retention, retention has instead dropped by three percent since 2012, right before football was introduced. Why, then, does it seem that this discrepancy has not been addressed? Someone needs to begin the process of mending the relationship between faculty, staff, and administration, in order to steer conversations toward how to better equip faculty with the funding, supplies, and support to handle these student needs. Failed initiatives need to be let go.

There is, of course, a lot more to it, but in the consideration of intangible, more difficult to grasp issues that students should certainly be paying more attention to and talking more about if they value their overall experience here at Stetson, this is a great place to start.

The Reporter covers the leaked results of the 2014 faculty satisfaction survey: https://digital.archives.stetson.edu/digital/collection/Newspapers/id/24355/rec/6

Compiled and analyzed results of the 2016 Campus Climate Survey: https://www.stetson.edu/other/many-one/media/pdfs/deland-executive-summary.pdf

(This link no longer works but here is a link to an article that details some of the information presented: https://www.jmco.com/ncaa-aup-2018/ )